The Mayors from 14 cities were exposed to proper inspection of the containments, licensed service delivery by the mechanical emptiers and zero-discharge principle of the FSTPs that have ensured safe sanitation along the whole sanitation service chain at the cities of Telengana in India. An eighteen-members delegation team from Bangladesh visited three cities of the Telangana state of India during November 14-16, 2022 to learn from the best practices in implementing City Wide Inclusive Sanitation (CWIS). The delegation team comprised of 14 Pourashava Mayors and 4 representatives from United Cities and Local Government Asia Pacific (UCLG-ASPAC), Municipal Association of Bangladesh (MAB) and ITN-BUET. The tour was jointly organized by ITN-BUET and Administrative Staff College of India (ASCI) in association with CWIS-FSM Support Cell (CFSC).

The three-day leadership development sanitation tour package included discussion sessions, field exposure visits sharing sessions with the key policy and decision makers. The delegates visited the Fecal Sludge Treatment Plants (FSTPs) at Uppal and Boduppal nearby Hyderabad City on the first day. On the second day, the delegates visited the existing FSTPs and adjoining under-construction large FSTP at Warangal City. The city representatives explained how Warangal City is gradually increasing their sanitation service delivery coverage over the whole city targeting all the citizens with special focus on poor and marginalized population. Along with the fund allocation from state and municipal governments, fund raising from Corporate Social Responsibility (CSR) and application of Public Private Partnership (PPP) modality have also been adopted for ensuring financing for the sanitation projects. They also explained how they promoted female-led sanitation service delivery while ensuring occupational health and safety and livelihood of the sanitation workers. The delegates visited a slum of Warangal City, where the effluent of the septic tanks is discharged into a stormwater drainage network, which finally reaches an effluent treatment facility. The Ward Councilor met with the Bangladeshi delegates, and shared his approach and experience on sensitizing the citizens on safe sanitation as well as ensuring delivery of sanitation services to the poor at affordable cost. The delegates also visited a public toilet being constructed and operated under PPP modality.

On the final day, the delegates visited the state Programme Implementation Unit (PIU) at Commissioner & Directorate of Municipal Administration (CDMA), Telangana. They interacted with the state Environment Sanitation Unit (ESU) members and leadership team, and got acquainted with CWIS diffusion plan at state level in Telengana and regulatory and ICT based monitoring systems. afterwards, the Commissioner and Director of CDMA met with the delegates, and discussed how seriously the Government of India as well as the states have considered the issue of safely managed sanitation, and how they are implementing CWIS. The exposure visit event was concluded by a closing ceremony, in which Professor Dr. Srinivas Chary, Director, CEUG&ID, ASCI awarded certificates to the Bangladeshi delegates. 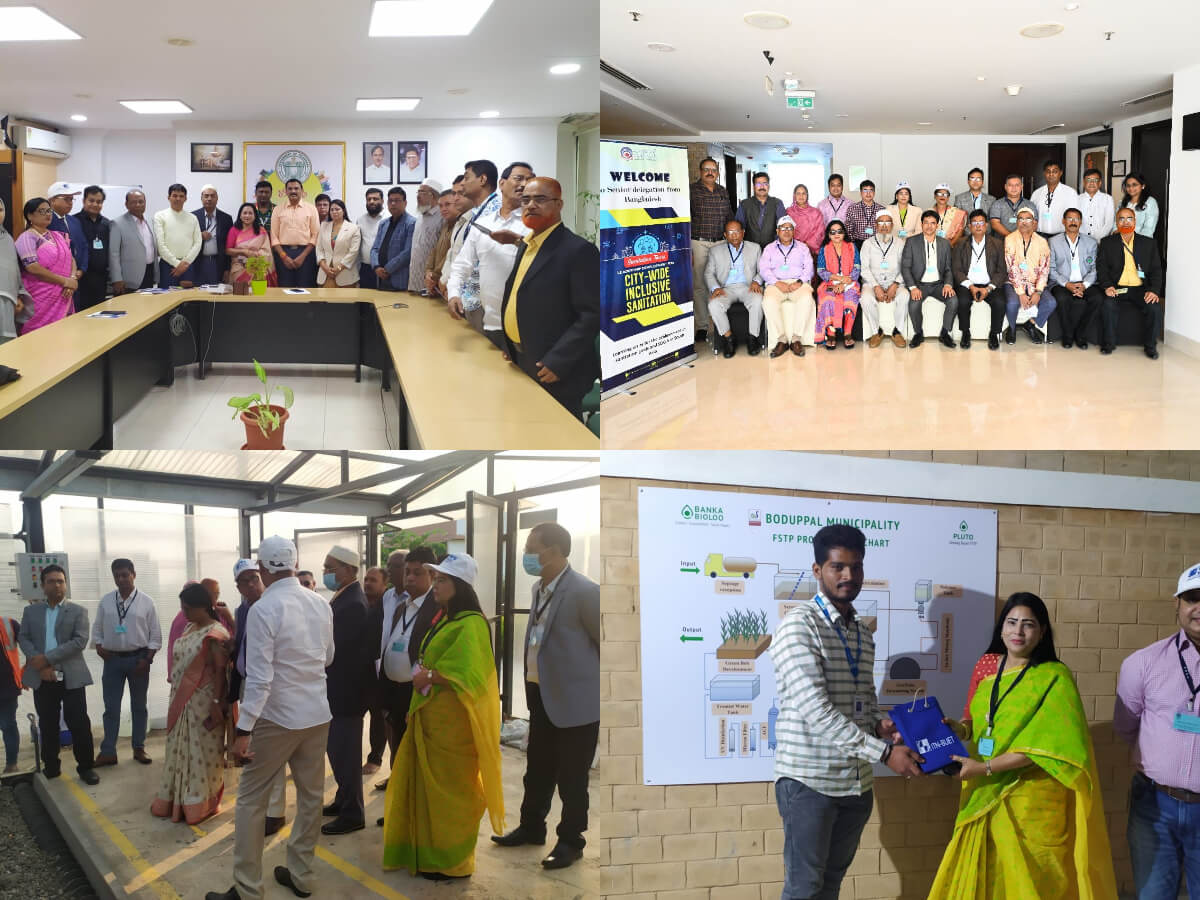 The key take-ways from this visit were establishing and operating efficient FSTPs at smaller lands at a reasonable cost, utilization of CSR and PPP mechanisms in sanitation implementation, and showcasing of strict mandate by the national, state and local government authorities and effective sensitization of the citizens.

After returning to Bangladesh, the City Mayors were reunited in an online event on December 04, 2022 to share their learnings and commitments. All the City Mayors applauded the sanitation tour event, and opined that the lessons learnt from the visit would be highly beneficial for them to implement CWIS in their own cities. All of them organized meetings with the municipal council and relevant key officials to share their experience after returning from the visit. They also provided commitment to implement CWIS at their cities, and to try to develop displayable CWIS examples for other cities from home and abroad.

In the experience sharing meeting, Mr. Rezaul Karim, Mayor, Lalmonirhat Paurashava, told that he assigned the relevant staff to install GPS machine with the vacuum tanker vehicles for tracking the emptying activities efficiently. He further opined that the children park inside the visited slum of Warangal City was an excellent example, which might be adopted in the Bangladeshi cities. Mr. Parimal Kumar Dev, Chief Executive Officer, MAB, added that along with GPS technology, ownership of the vacuum tankers by the private emptiers has reduced capital and O&M cost for the municipality, and licensing of these emptiers has ensured effective service delivery. Mr. Parvej Rahman, Mayor, Shariatpur Paurashava, opined that MAB should take strong initiative to ensure ownership of the khas lands within the municipal boundary to the Paurashava Authority by showcasing the practice in India observed during this visit. Finally, Mr. Dewan Kamal Ahmed, President, MAB and Mayor, Nilphamari Paurashava, concluded the online event thanking all the City Mayors for their enthusiastic and prompt actions in implementing the learnt knowledge from the exposure visit. He thanked ITN-BUET for organizing the exposure visit event, and suggested that similar exposure visits should be organized for the Mayors, Councilors and municipal officials of the CWIS implementing cities, and there should be extended exposures on topics related to financial management aspects at national, state and municipal levels for sanitation planning and implementation.