Proper management of fecal sludge is a crucial issue to develop the municipalities as future big cities, said the speakers in an orientation event on NAP

Rapid urbanization in the paurashavas of Bangladesh is making the task of providing safe and sustainable sanitation services more challenging day by day. The paurashava authorities are responsible for proper fecal sludge management around the city. The Department of Public Health Engineering (DPHE) is providing financial and technical support to several paurashavas through numerous projects. DPHE is working with the paurashavas to provide safe and affordable FSM services in the cities. An online orientation event on the National Action Plan (NAP) for Implementing IRF-FSM for the paurashavas under this project was organized on 8th March 2022. The event was jointly organized by ITN-BUET and CWIS-FSM Support Cell (CFSC), DPHE, in association with the 30 Paurashava Project. 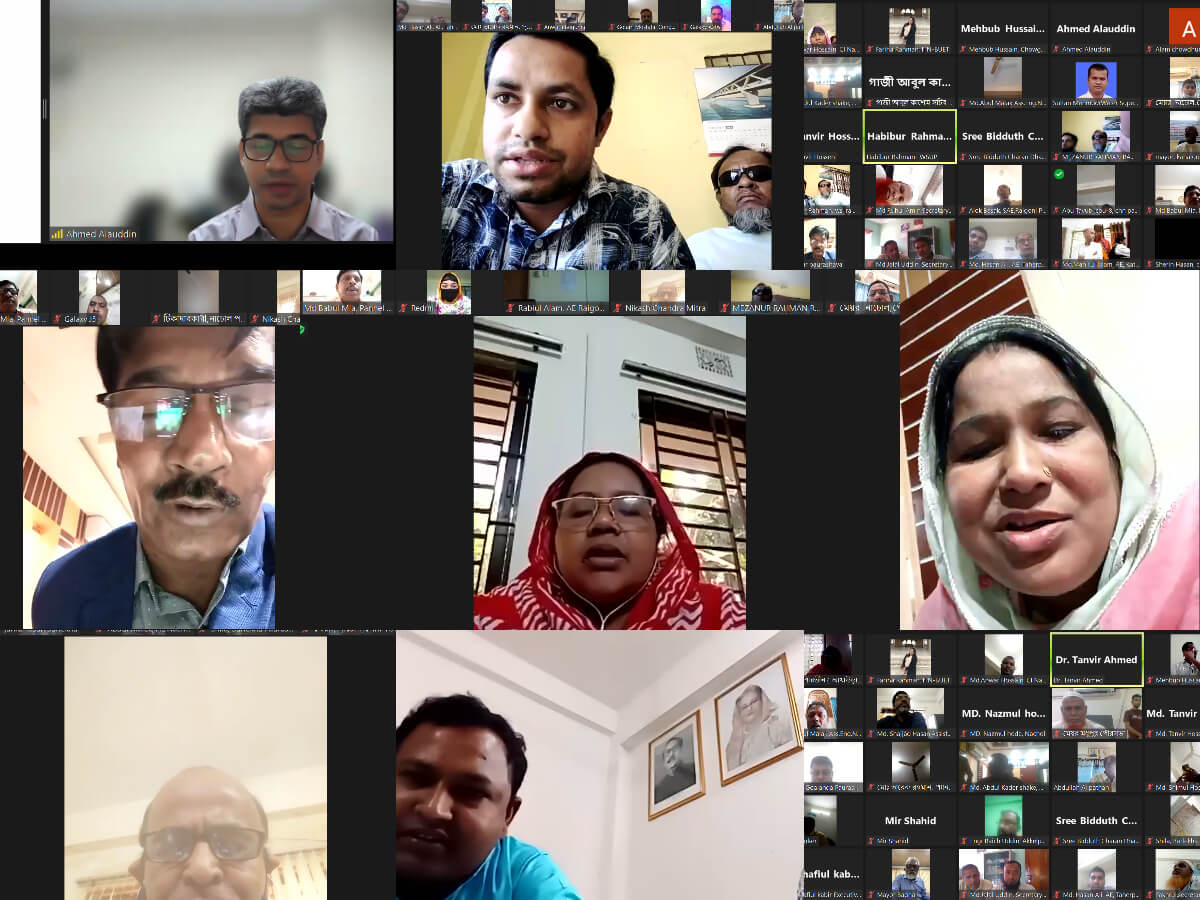 In his inaugural speech, Dr. Tanvir Ahmed, ITN-BUET, said that if the city authorities do not plan for a well-defined FSM service, it will create a great public health hazard. He also said that the LGIs are solely responsible for ensuring proper FSM service and hoped that the action plan would be implemented by them to achieve the targets. The Project Director of 30 Paurashava Project, Engr. Mir Abdus Shahid said that most of the paurashavas are lagging behind due to the lack of proper awareness-raising. He hoped that the online event would be able to trigger the Paurashava leaders in finding appropriate actions on FSM for their cities. Mr. Shahid also suggested that the city officials should approve the building plans, which have appropriate septic tank and soakage pit in the designs. He also urged to stop the illegal connections into the drain to save the environment and public health.

Mr. Habibur Rahman, Sanitation Lead, Water & Sanitation for the Urban Poor (WSUP), informed that WSUP is working with these paurashavas to ensure citywide inclusive sanitation services. It will provide technical support to the paurashavas to prepare a detailed FSM action plan based on the requirements and considering fecal sludge, solid waste and medical waste. Mr. Sanjay Mukherjee, Social Development Expert of CFSC, encouraged the city authorities to plan their FSM system according to the Local Government Act, 2009.

Mr. Alauddin Ahmed facilitated the open discussion session, followed by his presentation on the targets and milestones of NAP. Honorable Mayor of Islampur Paurashava, Mr. Md. Abdul Qader highlighted the need for capacity building of mayors, councilors and relevant officials for successful FSM intervention. He also added that the poor should be subsidized so that no one is left behind from proper sanitation service. Mr. Md. Abdur Rashid, Honorable Mayor of Nachol Paurashava, expected that the quick implementation of the project and development of infrastructures would benefit public health. Assistant Engineer Mr. Md. Manirul Islam from Katakhali Paurashava and Councilor Ms. Nargis Parveen from Akhaura shared the good practices of their paurashavas in stopping illegal connections and discussing FSM in courtyard meetings. Mr. Golam Mostafa, Conservancy Inspector of Ullahpara Paurashava, requested to provide suitable vehicles for narrow roads in the city.

Mr. Mahmudur Rashid Mazumder, Deputy Project Director, 30 Paurashava Project, said that DPHE has plans to build the capacity of paurashava leaders and officials. He recommended the paurashava to stop illegal connections, acquire land and allocate a particular location for sludge dumping until the treatment plant is constructed. Mr. Mazumder requested ITN-BUET and CFSC to share the existing knowledge, good practices and experience with the project personnel and paurashavas to build their knowledge. The participants appreciated the event and requested more training and capacity-building programs in the future.

Partners from South Asia met for knowledge and experience sharing in Mumbai, India