The third Urban Governance and Infrastructure Improvement Project (UGIIP-3) aims to promote sustainable human development, economic growth and poverty reduction by enhancing municipal management and strengthening capacity to deliver municipal services and improve physical infrastructure and urban services. One of the important elements of the project is to provide safely managed sanitation service through fecal sludge management to the city dwellers. It is also essential to align the project activities and outlines according to the National Action Plan (NAP) for Implementing IRF-FSM approved by the MoLGRD&C. Under the backdrop of ITN-BUET and CWIS-FSM Support Cell, DPHE, an online orientation event on the National Action Plan (NAP) for Implementing IRF-FSM for the paurashavas under the UGIIP-3 project was organized on February 14, 2022. 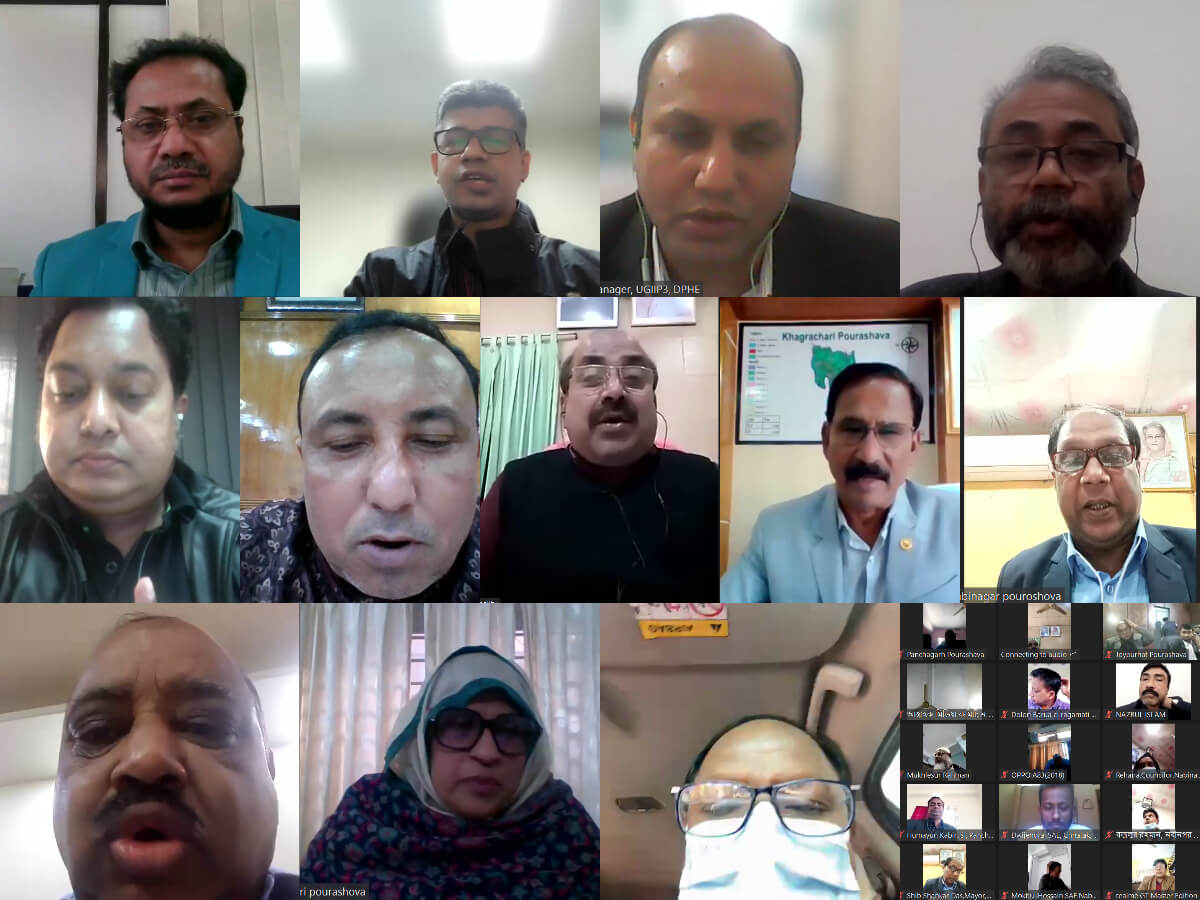 Mr. A. K. M. Rezaul Islam, Project Director, UGIIP-3, inaugurated the event. He said that the project is continuing to accelerate the Government’s commitment to achieving the SDG sanitation target by 2030. He opined that the development of NAP is a timely effort and the cities should plan their future activities based on it. Mr. Rezaul hoped that the orientation event would firm the commitment of the cities to build clean cities. Mr. Golam Rabbani, Project Manager, UGIIP-3, gave a brief presentation on the activities and achievements of the project cities on FSM. He said that as FSM is a new issue for the Paurashavas, they are facing many challenges. Proper capacity-building initiatives have been taken to tackle the challenges. He added that FSM services can not be sustainable without proper operation and maintenance. Social Development Expert of CWIS-FSM Support Cell (CFSC), DPHE, Mr. Sanjay Mukherjee, said that the Support Cell aims to work aligning with the vision of the Government to achieve safely managed sanitation for all. It focuses on integrated waste management, monitoring progress and incorporation of CWIS in WASH projects. He asserted that the paurashava should prepare their master plans considering the NAP to sustain the FSM service.

Mr. Alauddin Ahmed, Project Manager, ITN-BUET, gave a presentation highlighting the activities and milestones of the NAP. His presentation included national and paurashava-level roles and responsibilities and sharing of some good practices. He also focused on the existing policy, training modules, awareness-raising handbook and capacity-building materials in the sector, which can be utilized by the LGIs and government officials.

Mr. Golam Rabbani and Mr. Mohammad Imtiaz Sharif, Training Specialist, ITN-BUET, facilitated the open discussion. The Honorable Mayors and city officials appreciated the support from the project in developing FSM infrastructure and service delivery in their cities. The Honorable Mayor of Sherpur, Mr. Golam Mohammad Kibria, was enthusiastic to learn the actions by Gaforgaon paurashava and opined to stop the illegal connection in his paurashava. He also mentioned establishing a Standing Committee in Sherpur Paurashava to deal with the FSM issues. Mr. Md. Abul Khayer, Honorable Mayor, Laksham Paurashava, informed that his paurashava has already arranged land for FSTP, tagged the emptying fee with the holding tax and maintains a hotline number for FSM service. Mr. Akbar Hossain Chowdhury, the Honorable Mayor of Rangamati, mentioned that in order to preserve the natural beauty of hilly areas of Chattogram, proper waste and fecal sludge management is very important. He requested support on establishing portable toilets to manage sanitation services during an emergency or peak tourist season. The Honorable Mayor of Moulovibazar, Mr. Md. Fozlur Rahman said that they are planning to collect segregated waste from the households soon. He hoped to make Moulovibazar a clean city similar to developed nations. Mr. Shib Shanker Das, Honorable Mayor, Nabinagar Paurashava, commented that the waste and fecal sludge treatment plant should include facilities for recycling and reuse. Mr. Md. Shamsul Alam, Executive Engineer, Faridpur Paurashava, emphasized the development of software to maintain the database of scheduled desludging and requested support from the relevant organizations in this regard.

Mr. Dewan Kamal Ahmed, Honorable Mayor, Nilphamari Paurashava and President, Municipal Association of Bangladesh (MAB), said that monitoring is essential to continue FSM services in the cities. He hoped that more project support would be available to sustain the developments. Mr. Dewan Kamal requested CFSC and ITN-BUET to regularly organize capacity-building events and conduct necessary follow-ups with the cities. He committed full support from MAB concerning this. Mr. A.K.M. Rezaul Islam thanked the organizers and said the orientation would immensely help the project and the paurashavas. He urged the mayors of the paurashavas to become role models on FSM for the rest of the country.

Partners from South Asia met for knowledge and experience sharing in Mumbai, India

Proper management of fecal sludge is a crucial issue to develop the municipalities as future big cities, said the speakers in an orientation event on NAP